Tag Archive for: Heart Of God

You are here: Home1 / Heart Of God 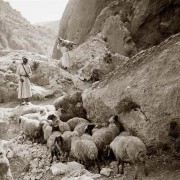 The heart of God is amazing.  He is far beyond us regarding His concern for people.  Every one counts.  God is concerned for every person on this Earth.  He cares for the ones that we overlook and that we might sadly consider “out of reach”.  He seeks those ones who would take “too much effort” to love and care for.  He is concerned for the “less thans” and the insignificant.  He seeks those who have estranged themselves from Him, either through negligence or by determined choice.

Jesus didn’t start by saying who was greatest. He started by saying what one had to be like to even enter.

Children were not highly esteemed in those days. On one occasion, they were considered a nuisance by the disciples.  They were not high on the pecking order of who was important.

Jesus went on to teach about the heart of God regarding those who were not highly valued.

Matthew 18:12-14 “What do you think? If a man has a hundred sheep, and one of them goes astray, does he not leave the ninety-nine and go to the mountains to seek the one that is straying? 13And if he should find it, assuredly, I say to you, he rejoices more over that sheep than over the ninety-nine that did not go astray. 14Even so it is not the will of your Father who is in heaven that one of these little ones should perish.

A good shepherd is not satisfied with having most of his sheep.  He values all of his sheep.  It would take a lot of effort to leave the ninety-nine and find the lost one.  One might think that having most of the sheep would be acceptable.  If one was lost, it was probably their own fault, or so it could be reasoned.  Why put forth effort to reach one when ninety-nine were safe?

In joining these two ideas together, Jesus teaches us this lesson:  God loves those considered less important, and those who might be considered too much trouble to take care of.  Jesus joined the idea of being like a child and the one lost sheep.

The world may think as follows: “Children are not shakers and movers.  They are not world changers.  No one wants to grow up and be like a child.  They aren’t that important.  The lost sheep is too much trouble to find.  It is their own fault that they are lost.  There are ninety-nine faithful ones who have chosen to stay.  That is a good percentage, and a one percent loss is acceptable.”

Jesus goes on to teach us in verse 15-20 about how to restore a sinning brother.  It is a lesson on how to seek and restore a lost sheep that we might consider “too much trouble”.

It is true that we cannot force people to stay in the flock of God, and that sometimes they may need to be asked to leave, lest they hurt others.

The main point on this passage is that God’s heart desires all people, including those who seem insignificant, and those who have gotten themselves lost.

May we rejoice over the ninety-nine.  May we pray for and seek out the one.