Blog - Latest News
You are here: Home1 / Where The Rubber Meets The Road 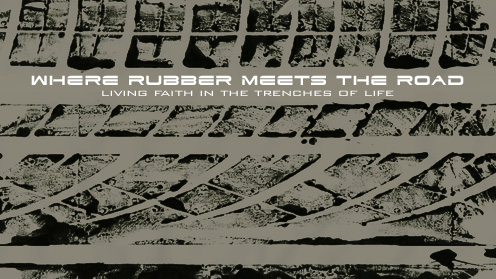 Some days I just need a reality check! A million things happen in life (and in the work of the Lord) and sometimes I find my heart sitting a bit off kilter. Oftentimes a Sunday afternoon can be that for me. Having just preached two services and prayed/encouraged/spoke to people before, in-between and after the services, eight hours later, sometimes on a Sunday afternoon I can feel like I am dragging my head and heart around. Many folks who devote their Sundays to serving can feel this way. On top of that, there is the inevitable (for some of us) Sunday afternoon feelings of uselessness, fear, apprehension and “what did I just say?” moments.

Last Sunday was one of those days for me. But God…

I received an email from someone in the fellowship. They were in the hospital with their newborn daughter (who was born 5 weeks early by emergency C-section). But they weren’t emailing for themselves. Instead they were emailing for their closest friends, who were actually in the next room. This couple and I had prayed for their friends almost 7 months ago. Right away, this couple’s pregnancy was at risk as the baby had a chromosomal abnormality. The child was not growing at the normal rate and pregnancy went to full term. I was emailed to see if I can come and visit the couple. They were in the hospital and the doctors had given the couple a 99% chance that the baby would be stillborn.

When I got to the hospital, I met the brother who emailed me. We spoke for a bit about his wife and new daughter who was in the Neo-natal intensive care. He shared the entire story about his daughter and wife. And about their friends who we were about to see. He was without sleep and had yet to hold his daughter. His wife was recovering from surgery and there were concerns about his own family. Yet his wanted to serve and bless his friends.

I entered the hospital room and began to talk with this couple. They shared about their journey and what was ahead of them. The reality of the possibility of giving birth to a stillborn child. The unknown. The fears. Yet, in all of the discussion, the tears and sadness, there was that precious hope in the God who can do anything. As we spoke about the reality of Jesus, the reality that God knew all of this and was there for them, the strength that is available by the Spirit, I thought to myself, “This is where the rubber meets the road.” This couple was heart-broken and scared yet so rooted in the unwavering love of God. We prayed. We cried. We laughed. We spoke of life, death, heaven, eternity and homesickness. We read Psalms and spoke of Jesus preparing mansions. We spoke of anger, faith and loss. Yet in all of it, there was a simple faith and an awareness of God’s grace at work in all of this.

I think that sometimes, in all of the rumblings and ruminations of a million voices, controversies, ideas and internet arguments, it is so easy to lose focus on the simplicity and awesomeness of the reality of God in Jesus. I was blessed with a return look at why I wanted to follow Jesus in the first place. Simply because He is and He is a rewarder of those who diligently seek Him. Not a reward of getting everything we want, but the reward of Himself in whatever transpires. That is where the rubber meets the road. This is what was sustaining a young couple in the face of the most horrific of circumstances. This is where I want to spend much more time than I do. In that simple place of the reality of God. A place where there is no arguments, no bickering, no frustration, no question marks. It is the place where there is only grace, love and peace. Resting in the arms of God in the midst of a beautiful mess.

To close out the story, little Jonathan was born at 6 am on Monday morning and his parents got to take him home today. A total miracle. Although there are many complications and the prognosis is still dire (the doctors said some children can fight death of a few weeks), this precious family has been able to spend time with their son until he is goes home to be with the Lord. The couple who first contacted me’s daughter (Mackenzie) is completely off of all her tubes and Lord willing will be heading home in the next day or so. The testimony of these two families has touched the hearts of the hospital staff in profound ways. We are hoping and praying (if the Lord wills) to do a joint baby dedication at church on Sunday! Where the rubber meets the road, God is God. He finished the work on Calvary’s cross and will be faithful to complete the work He began in us.

Hope for the Guilty

How to react when you’re wronged
Scroll to top