Tag Archive for: End of the World

You are here: Home1 / End of the World 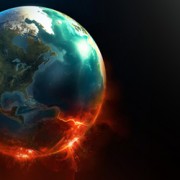 The APOCALYPTIC PROPHECIES, a doomsday publication (EVENT bookazines, 2012) about the predicted end of the world on December 21, 2012, states this about the Mayan calendar that begins on 3104 B.C. and ends with December 21, 2012:

The long count calendar was used to predict the future, and its built-in cosmic clock that runs in 5,125-year cycles has long been thought to end in catastrophe. With the long count they were able to determine and follow time back to 3104 B.C. – 3000 years before Christ – although scientists and historians today are unable to come up with a practical reason for going all the way to that trouble. Why should they care?(Page 10)

The Mayan civilization, inhabiting present day Guatemala and other South American states, had its heyday between 250 A.D. and 900 A.D.

The puzzling question is why their calendar goes back to 3104 B.C.

Not only does the Mayan calendar begin with 3104 B.C. but also other ancient civilizations have a similar starting date. The Hindu Kali Yuga calendar began on February 18, 3102 B.C. and is predicted to usher in the Golden age about 5113 years later taking us close to 2012.

No one seems to have a clue.

Could the Bible have a clue?

As a Bible-believing Christian I am convinced that the Biblical world history is the accurate one. Moses wrote Genesis as world history by divine inspiration. Christ, the Son of God, endorsed it. By contrast the histories of many ancient civilization are not fully trustworthy as the historians who wrote them did not have access to accurate information or the commitment to truthful recording. For example, some civilizations exaggerated their antiquity to claim that theirs is the oldest civilization.

According to Biblical history, the present world hails from the Genesis flood which had destroyed the entire world except the eight-member family of Noah. The date of the flood, according to the genealogy in Genesis 5, is 1656th year of Adam. That was in the 600th year of Noah. So Noah’s birth year is 1056th year of Adam.

Why is this date important to ancient calendars?

Interestingly, it is NOT the predicted end-of-the-world date of December 21, 2012 that is important. Almost all authorities are now agreeing that the predicted doomsday of December 21 has no significance. It will pass without any major event. What may be really significant is the beginning date of these ancient calendars that points to the Flood of Noah as a momentous world event. And it was indeed the end of the pre-flood world! Jesus said that “Just as it was in the days of Noah, so also will it be in the days of the Son of Man” (Luke 17:26). The Second Coming of Jesus is the really serious End of the World event we should be concerned about. It will usher in the New World, the Golden Age of Christ’s Millennial reign on earth (Revelation 20:6)

T.V. Varughese Ph.D. received undergraduate degrees in science, astronomy, and education and a masters degree in Mathematics and Statistics from the University of Kerala.  In 1971 he received a second masters degree and a Ph.D. in mathematics from Indiana University, USA, where he later served on the faculty.  He has taught in India, Ghana, and in the U.S.A. He is the founder and president of International Discipleship Ministries Inc., and has authored its Ministry Leadership Institute’s MasterDesign for Life courses for discipleship and equipping which are being offered in the U.S. and in the 10-40 nations.  Dr. Varughese and his wife Miriam live in San Diego, California.