You are here: Home1 / combat 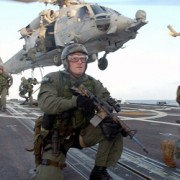 ***Written a few days after the killing of Bin Laden***

Ten years ago today I was an active duty Navy SEAL deployed to the Middle East, today I am the Senior Pastor of Valley Baptist Church contemplating the death of Osama Bin Laden. Every now and again I have these moments where my two worlds sort of collide. Today is one of them. The Internet is a furry with news, Facebook status updates, and blogs all reporting on this historical event. The chatter has inspired me to blog on a topic that is near and dear to my heart–The Christian and Combat.

First, let me begin by stating that I am writing this on my own behalf. My views are my own and do not necessarily reflect any group that I represent. These are my thoughts in progress and I do not claim to be an expert…although, I probably could. 🙂

Second, I have had many discussions with Christian pacifists over the years. I love the majority of them dearly. They are my brothers and sisters in Christ and we just don’t agree on this one issue. Some have accused me of not being able to see the Scriptures clearly because my background distorts my ability to listen to the Bible’s teaching. I admit that this really bothers me. They are simply wrong and assume my inclination is to hold a “pro war/violence position” because of my military background. In all honesty, the opposite is true. I have had to draw my gun on people (although I have never actually had to kill someone) and I have lost a number of very close friends in battle and have seen the after affects of Post Traumatic Stress Disorder. I would LOVE, LOVE, LOVE to take a pacifist position on this subject, but the Scriptures will not allow me to do that (in my humble opinion). Violence of any sort is horrible and I long for the day when God scraps this world and starts a new, but for now I am here living in a sinful fallen world faced with horrible things where there is no simple answer.

“The Christian and Combat” was the title of my Master of Divinity thesis. As a former Navy SEAL who is now a pastor and law enforcement chaplain, I feel I need to get to work and convert it into a user friendly format for publication as I am often asked for my thoughts on this subject. One of these days, one of these days…

My first combat mission was on September 9, 1999–my 25th birthday. At this point in my life, I had spent the last seven years preparing for this moment and had been a Christian for about 3 years. It was dark, pitch black dark, in the Northern Arabian Gulf off the coast of Iraq, my adrenaline was flowing, and I distinctly remember thinking, “Gunnar, how did you get yourself into this one?” I know the feeling that many soldiers and cops experience…my prayer is that I can help those who protect us answer these deep theological questions prior to finding themselves in combat.

There is no way for me to blog about this in its entirety–I need to write that book. But I will attempt to answer a couple of questions: 1) the need for warriors, 2) the authority of the warrior, and 3) the Christians response to violence.

The need for warriors. There is a story in the Old Testament that inspired the writing of my thesis and it is found in 1 Samuel 23:1-5. David and his mighty men are on the run from Saul when David gets word that the Philistines are plundering the people of Keilah. My first point against the pacifist argument is evil is happening all around us. You can be a totally passive person (which I feel like I am) and find yourself witnessing one person or group that is violently attacking another. I love what Dietrich Bonhoeffer says about this reality, “Silence in the face of evil is itself evil: God will not hold us guiltless. Not to speak is to speak. Not to act is to act.” David and his men were exposed to an evil situation, their initial reaction was not to respond because they weren’t in the best position to help. David asked God a second time if this is what he was to do. God’s desire was for David to proceed onward using violence to stop this evil that was already in progress. Today is no different. Evil is everywhere. Men and women everywhere are doing evil to all sorts of people. Are Christians simply not to intervene? I don’t think so.

The authority of the warrior–military, cop, or individual. The clearest teaching anywhere in the Bible on this subject is found in Romans 12:9-13:4. This passage is pretty intriguing to me this week as it is very similar the Sermon on the Mount which I am preaching on through the month of May. Romans 12:9-17 has all of the verses that pacifists love to quote like: “Bless those who persecute you”, “Never pay back evil for evil”, etc, etc. Yes, I believe this all applies to the Christian and I take these verses literally, but a literal interpretation forces one to look at the whole context–one cannot study Scripture in isolation of the whole.

Romans 12:18-19 begins to shed some light on how we as Christians are able to do this. First, the Bible says we are to be at peace with other people if it is possible and as much as it depends on our own actions. Then it says, “leave room for the wrath of God.” Okay so this is very interesting. We are not to take our own vengeance because God’s wrath is more effective than our own wrath (okay, the text doesn’t say why, that is my opinion). In my Bible I have drawn from “wrath of God” in Romans 12:19 down to Romans 13:4 where the thought carries through. Here the Bible essentially says that “it” (i.e. the authorities or government) “does not bear the sword for nothing” and that it is a “minister of God, an avenger who brings wrath on the one who practices evil.”

I have met a number of pacifists that I respect. Concerning these verses in Romans 13 they would agree that the government is responsible to bear the sword, but would say based on Romans 12 that there is no place for the follower of Christ to function in this capacity of authority as the one bearing the sword. Biblically speaking, the wrath of the government is the wrath of God (for the record, I am not defending all government actions, time does not allow me to unpack this, but I do think God judges nations Isaiah 34-35 this will be in the book). So to say that the Christian cannot function in this capacity is in essence to say that they Christian is holier than God and this responsibility should be left the the unregenerate.

Every soldier and cop must understand the concept of being under authority. There was one such soldier who encountered Jesus in Capernaum who understood this concept and expressed it to Jesus (Luke 7:1-10). Jesus’ response to this man was, “I say to you, not even in Israel have I found such great faith.” This is a pretty incredible statement if you stop and consider it for a moment. The point is that when life is taken it must be under the proper authority of God and the government and right circumstances–whether you are a soldier, cop, or individual defending yourself or others.

The Christian’s response to violence. Yesterday I started preaching through Luke’s account of the Sermon on the Mount (Luke 6:20-49). One verse stuck out to me (v.21), “Blessed are you who weep now, for you shall laugh.” Am I happy that Osama Bin Laden is dead? Yes and no. Yes because a man who promotes evil and destruction to many people is gone. “Relief” is probably a better word than “happy.” Many of us in the West are not fully aware of the evil this man inflicted in the world. He killed many innocent people brutally. I am sad for what he represented because another will arise in due time…there are many already doing evil to the innocent even as you read this. He is dead, but many died along the way. One peer of mine calculated that some 62 SEALs have died fighting the war against terrorism. I know a few widows and children who are left behind…Osama Bin Laden’s death doesn’t undo this or the attacks that have been committed during his lifetime. But there is pleasure in knowing that the government is following through with God’s command to bring “wrath on the one who practices evil” (Rom. 13:4).

There is so much more I could write on regarding this subject, but I am running out of steam and I would like to post this tonight. Regardless of your theological bent regarding pacifism, I think we all agree on Paul’s instructions to Timothy, “First of all, then, I urge that entreaties and prayers, petitions and thanksgivings, be made on behalf of all men, for kings and all who are in authority, so that we may lead a tranquil and quiet life in all godliness and dignity” (1 Timothy 2:1-2).

We should be on our knees this day praying as Paul tells us to above. I am thankful for the sacrifice of soldiers, cops, and good Samaritans who put their lives at risk in the calling of restraining evil.