Blog - Latest News
You are here: Home1 / Can a Christian Vote for a Mormon? 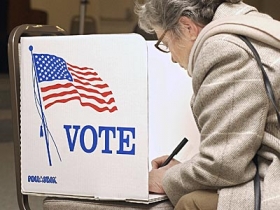 The challenge of voting is solved for me.  My vote is not determined by political party, nor by the candidate’s charisma, or his theological purity – I vote platform philosophy.  Whichever platform most closely aligns w/ my values is the one I will vote for.  If the Democratic platform aligns with my worldview more than the Republican one, I will vote Democratic and vice-versa.

I would rather have a Mormon working for me than a Christian working against me.

The question isn’t: is Mormonism heresy?  That question is definitively settled for the evangelical Christian.  The question is: can a Mormon be President?  More exactly: can a theological heretic be a competent President?  Well, would you support a Mormon Republican who sought to protect life in the womb or a Christian Democrat who was indifferent to it?  Would you support a Mormon Republican who calls for a strong defense or a Christian Democrat wanting to scale down our military to a position you would consider weakness?  Would you support a Mormon Republican who championed 2nd Amendment rights or a Christian Democrat who wanted to pry your gun from your cold dead hands?  These aren’t theoretical questions.  (I think issues of trinitarianism take a back seat to public justice).

A few more questions are worthy of consideration –

Can a man of your theological persuasion have a different political vision?

Can a man hold a theological persuasion quite different than yours and have the same political vision?

Can a Christian be open minded toward abortion, want to expand the role of government, work toward a socialist state, and weaken the military?

Can a theological heretic, or a pagan for that matter, work toward limited government and be a social and fiscal conservative?

I would have no problems voting for Mormon.  I don’t see that it presents a theological or philosophical problem for the evangelical Christian.  Someone might object that a Mormon President will give legitimacy to the Mormon Church.  Historically, as far as I know, the ranks of the Roman Catholic Church didn’t swell during Kennedy’s presidency, nor did the evangelical church see rising numbers because of the legitimacy that Bush the 2nd gave to it.  And if Romney is the GOP candidate, and if he does stir up interest in and curiosity about the Mormon church, let’s take advantage of it.  We should welcome a national conversation about Mormonism.  If Romney is the GOP candidate, study up, boys, and have a response to questions and concerns about Mormonism.  But again, I would vote for a pagan or a Mormon if we had a shared platform/a shared political philosophy.

I will be on my way back from Israel when this publishes and so I won’t be able to interact with any comments that are posted until later.

Dying Churches and the Church Planter

Church transitions: The bus is leaving, make a decision
Scroll to top