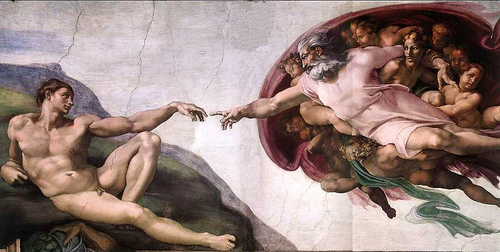 This post is a response to a question that I posed to David Guzik. He graciously allowed me to post it as it was a great response.

I sent David a question based on something I saw tweeted that he had said.
“We gain far more in Christ than we lost in Adam.”

I asked David, “Is this true? Can you riff on this a bit for me?”

Most of us think that the ideal world is the world of innocence, where sin or even have never been experienced. But God seems to place a greater value on the world of redemption.

Adam was certainly innocent, in the sense of not knowing good and evil (Genesis 3:22). But he was not righteous, in the sense of having fulfilled all of God’s law. Jesus came as the second Adam (Romans 5:12-21), and perfectly fulfilled the will and law of God with His obedient life. This positive righteousness of Jesus is credited to the believer by faith (Romans 3:21-22, Philippians 3:9). This is something greater in Jesus than Adam never had.

We also don’t have any evidence that Adam was regarded as an adopted son of God, but the believer is in Jesus (Ephesians 1:5, Galatians 4:5).

In Ephesians 1:9-12, Paul wrote of the mystery of His will that has been made known to us. What is it? That in the dispensation of the fullness of the times He might gather together in one all things in Christ. A critical aspect of God’s plan of the ages is to “sum up” or resolve everything in Jesus. In a sense, we could say that God glorifies Himself by allowing a problem and showing His wisdom in not only solving the problem, but in making the end result greater that the prior condition.

I see a wonderful consummation of all this in Revelation 21:5: Then He who sat on the throne said, “Behold, I make all things new.” And He said to me, “Write, for these words are true and faithful.”

This is an authoritative announcement, coming from the throne of God itself: He who sat on the throne said. In this announcement, He says: “Behold, I make all things new.” This statement is in the present tense, “I am making everything new.” Revelation 21:5 marks the consummation of God’s work of renewal and redemption, having begun here and now in our present time.

The words “All things new” connect with the thinking behind God’s eternal plan – to allow sin and its destruction in order to do a greater work of making all things new. At this point in His plan of the ages, the plan is complete. All things are new.

Our instinct is to romantically consider innocence as man’s perfect state, and wish Adam would have never done what he did. But we fail to realize that redeemed man is greater than innocent man; that we gain more in Jesus than we ever lost in Adam. God’s perfect state is one of redemption, not innocence.

A few days later, David added this quotation to an email

Today I was reading some Spurgeon, and methinks I have a great quote from him about this very topic:
“You have been a gainer by Adam’s fall. You might almost say, as one of the fathers did, O beata culpa, ‘O happy fault,’ which put me into the position to be so richly endowed as now I am! Had you stood in Adam, you had never been able to call Jesus “Brother,” for there had been no need for him to become incarnate; you had never been washed in the precious blood, for then it had no need to be shed. Jesus has restored that to you which he took not away. He has not merely lifted you from the dunghill to set you among men, but to set you among princes, even the princes of his people. Think of the bright roll of promises, of the rich treasure of covenant provision, of all that you have already had and all that Christ has guaranteed to you of honor, and glory, and immortality, and will you not in the midst of the congregation praise the Lord?” (Jesus, the Example of Holy Praise)

Wow. I love that: You have been a gainer by Adam’s fall …. O beata culpa …. Jesus has restored that to you which he took not away.

No wonder that God had to tell John, “Write, for these words are true and faithful.” John was probably so astounded by these words that he forgot to write – and must be told to do so.

That’s how it runs through my mind. To me, it is just plain glorious.

Reconciled to God
Scroll to top