You are here: Home1 / Politics 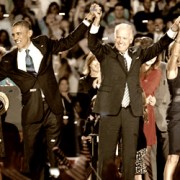 As I lay down to go to sleep last night I thought to myself, “What is the best way to respond to those I lead this week regarding the electoral decisions of our nation in this 2012 campaign.” A couple of hours earlier a member of the church had texted me asking, “Well, any words of encouragement, pastor?” My immediate thought and response was, “Jesus is the King of kings!” So as I faded into unconsciousness a reoccurring thought swirled in my mind, “God Voted Obama.”

I received an email this evening with the subject, “THE SADDEST DAY IN THE HISTORY OF THE U.S.” The email happens to be from someone I do not know who somehow had placed me on their distribution list many months ago and instead of actually unsubscribing I’ve consistently just delete his messages, but this one caught my attention. After reading the opening sentence (that’s as much as I could handle), I once again began thinking “God Voted Obama.” The failure of the author to recognize God’s active involvement in the affairs of men is startling to me, but gives me some further insight into his theology.

I realize that what I’m about to say will not be popular with the largely evangelical, center-right crowd that will likely read this post, but I’m convinced it’s scripturally supported and worthy of consideration.

In the 6th century B.C. the Nation of Judah was led into captivity by Nebuchadnezzar, king of Babylon. There are a number of contributing reasons for Judah’s captivity, but one of the major ones was Israel’s unwillingness to obey God’s command for sabbath rest. Every seven years the land was to lay fallow, but in Israel’s greedy desire for ever increasing yields, they disobeyed the sabbath rest for 490 years. Thus God required 70 years of rest for His land, which translated into 70 years of captivity for disobedient Israel, as they worked as slaves under the taskmasters of Babylon. This is just one of several such instances in the Old Testament. God is very serious about righteousness and justice. He does not take lightly disobedience. The blessings and curses of the commands still apply and are, I believe, generally applicable to all humanity.

For many years our nation has greedily pursued ever increasing yields. We’ve selfishly sought for extravagant abundance and idolized the lifestyles of the rich and famous. Our bent toward instant gratification has, in recent times, pushed us to do so with little thought for the long-term costs and consequences. After more than a generation and a half of such pursuit we’ve seduced ourselves into believing that “tomorrow will be as today and much more abundant” (Isaiah 56:12).

Furthermore, as of December 23, 2011, a staggering 78% of Americans self-identify as Christians (Gallup). Obviously there are a number of cultural guilt factors that play into people identifying as Christians when asked. Be that as it may, there is good reason to believe that the 78% have at least some connection to Christianity in their past. Yet the scriptural exhortations to love our neighbors (Mark 12:31), do justly, love mercy and walk in humility (Micah 6:8) have done little to stir our social engagement and curb our indolent pride.

With these things in mind I wonder; is it not possible that we’ve been given the government that will reprove and correct — even if it be by taxation — our unroghteous behavior? Is it possible that the church’s abdication of social responsibility has created a vacuum that someone or something must fill? The government being the logical “something?”

Don’t misunderstand, I don’t like taxes per se. Nor am I a fan of individual mandates or social safety-nets hung upon deficits and debt. I’m a firm believer in personal responsibility and think loving charity is far more noble than begrudging taxation any day of the week. But if we indeed believe that promotion comes from The Lord (Psalm 75:6-7) and that there is no authority except that which God has established (Romans 13:1), then perhaps we should consider why God has given us the leaders we’ve elected? Before we tune in to Foxnews and Glenn Beck, maybe we should hearken the Prayer of Daniel…

1 In the first year of Darius the son of Ahasuerus, of the seed of the Medes, which was made king over the realm of the Chaldeans;
2 In the first year of his reign I Daniel understood by books the number of the years, whereof the word of the LORD came to Jeremiah the prophet, that he would accomplish seventy years in the desolations of Jerusalem.
3 And I set my face unto the Lord God, to seek by prayer and supplications, with fasting, and sackcloth, and ashes:
4 And I prayed unto the LORD my God, and made my confession, and said, O Lord, the great and dreadful God, keeping the covenant and mercy to them that love him, and to them that keep his commandments;
5 We have sinned, and have committed iniquity, and have done wickedly, and have rebelled, even by departing from thy precepts and from thy judgments:
6 Neither have we hearkened unto thy servants the prophets, which spake in thy name to our kings, our princes, and our fathers, and to all the people of the land.
7 O Lord, righteousness belongeth unto thee, but unto us confusion of faces, as at this day; to the men of Judah, and to the inhabitants of Jerusalem, and unto all Israel, that are near, and that are far off, through all the countries whither thou hast driven them, because of their trespass that they have trespassed against thee.
8 O Lord, to us belongeth confusion of face, to our kings, to our princes, and to our fathers, because we have sinned against thee.
9 To the Lord our God belong mercies and forgivenesses, though we have rebelled against him;
10 Neither have we obeyed the voice of the LORD our God, to walk in his laws, which he set before us by his servants the prophets.
11 Yea, all Israel have transgressed thy law, even by departing, that they might not obey thy voice; therefore the curse is poured upon us, and the oath that is written in the law of Moses the servant of God, because we have sinned against him.
12 And he hath confirmed his words, which he spake against us, and against our judges that judged us, by bringing upon us a great evil: for under the whole heaven hath not been done as hath been done upon Jerusalem.
13 As it is written in the law of Moses, all this evil is come upon us: yet made we not our prayer before the LORD our God, that we might turn from our iniquities, and understand thy truth.
14 Therefore hath the LORD watched upon the evil, and brought it upon us: for the LORD our God is righteous in all his works which he doeth: for we obeyed not his voice.
15 And now, O Lord our God, that hast brought thy people forth out of the land of Egypt with a mighty hand, and hast gotten thee renown, as at this day; we have sinned, we have done wickedly.
16 O Lord, according to all thy righteousness, I beseech thee, let thine anger and thy fury be turned away from thy city Jerusalem, thy holy mountain: because for our sins, and for the iniquities of our fathers, Jerusalem and thy people are become a reproach to all that are about us.
17 Now therefore, O our God, hear the prayer of thy servant, and his supplications, and cause thy face to shine upon thy sanctuary that is desolate, for the Lord’s sake.
18 O my God, incline thine ear, and hear; open thine eyes, and behold our desolations, and the city which is called by thy name: for we do not present our supplications before thee for our righteousnesses, but for thy great mercies.
19 O Lord, hear; O Lord, forgive; O Lord, hearken and do; defer not, for thine own sake, O my God: for thy city and thy people are called by thy name.

Let me end by affirming my heartfelt prayer for President Obama; for the president he defeated a mere 24 hours ago has left him with one heck of an economic mess.