Note:  Please refer to Part I…

We see in the New Testament that the apostles used many of the Old Testament prophecies to prove that Jesus was the long-awaited Messiah.  In the book of Acts, from beginning to end, we witness the apostles again and again quoting the Old Testament scriptures to a Jewish audience to affirm Jesus was the Messiah.  (Reference Acts 2:25-34, 3:21-23, 4:25-26, 8:32-35, 13:27, 17:1-3, 18:28, 24:14, 26:6-22 and 28:23).  So here is something essential; we need to believe in the POWER of the WORD and remember how JESUS witnessed to the Jewish people.  He showed them in the WORD where the law and the prophets of the Old Testament foretold His coming and His purpose here.  Three powerful examples are in Luke 4:16-21, Luke 24:27, and Luke 24:44-45.  We should consider using the same method.  Every Jew will have an interest in the Old Testament (even secular Jews) because they regard this scripture as theirs; it shows that Jesus is the Jewish Messiah.

A common response from young Jewish people is “show me in the Old Testament where the Son of God is mentioned and I will believe it”.  I have in the past shown just one verse to the amazement of a young Jewish person.  Look at all these verses for more power in sharing:

In additional let me speak about some verses which provide a clear view in the Old Testament of Jesus as the Messiah:

In Psalm 2:7, it clearly says that all the nations of the world will be subject to this Son.  This was never true of David’s son Solomon, so it cannot be referring to him.  In addition the classical interpretation of this verse is of the Messiah also.

In Daniel 9:25-26, we read the TIME OF THE MESSIAH’S COMING; verse 26 reads that the Messiah had to come before the second temple was destroyed.  Note that Titus and the Roman soldiers destroyed it in 70 A.D.   I have heard or read of several prominent Jewish men who have accepted Jesus as Messiah just through this prophecy.  Some Hebrew scholars have suggested that King Agrippa was the one referred to by the Hebrew word “Mashiach” (Messiah).  Note that King Agrippa died before 70 A.D.  Although Hebrew scholars were correct about requiring this to be fulfilled before the second temple’s destruction in 70 A.D., the Messiah spoken about could not be King Agrippa since Agrippa was not even from David’s seed nor was he a benevolent ruler.  It could never be considered that Agrippa would be the Messiah.

Micah 5:2 speaks about the birthplace of the Messiah.  This is weighty evidence to present to a Jewish person.  Most Jewish people, as I said in Part I, have no idea that this verse and other prophecies like it exist.

Isaiah 42:6 and Isaiah 49:6 speak about the Messiah as “a light to the gentiles”.  This is such an important fact to present to Jewish people.  What was it that made millions of gentiles come to worship the God of Abraham, Isaac and Jacob?  This was predicted of the Messiah, that He would be “a light to the Gentiles”.

Isaiah 53 contains the wonderful prophecy of Jesus.  More Jewish people have come to faith reading this prophecy than any other in the Old Testament.  It could be called the “John 3:16 of Messianic prophesy”.  Often I ask Jewish people to read it carefully, and then I ask them who is it speaking about.  The reply most of the time is “Jesus”.  I have heard from scholars who say it was the sufferings of Israel spoken of and not the Messiah.  This is a modern day rabbinical answer.  The idea or application that this refers to the suffering of Israel is unfounded.  Israel, it is true, is called the “servant of the Lord” in places like Isaiah 49:3, but NEVER the “righteous servant” as spoken about in Isaiah 53:11.   Contrary, Isaiah speaks of the people of Israel as a people of “unclean lips” (Isaiah 6:5) and that their sins have “made a separation between you and God.”  (Isaiah 59:2).

Another very strong point worth mentioning comes from Isaiah 52:4 and Isaiah 53:8. In Isaiah 52:4, “my people” is without a doubt referring to Israel in the phrase “my people went down at first into Egypt to reside there.”  In Isaiah 53:8, the “my people” term appears again with reference to Israel, alongside of the promised “He”.  Jewish scholars attempt to define the term “He” as Israel.  If this is the case, the question can be asked (as it has been asked of me on numerous occasions):  “If the “MY people” in verse 8 is Israel, who is the “He” in the same verse?”  Both cannot refer to Israel. It would be impossible to say  “for the sins of my people (Israel), was He (Israel) stricken” This would make “my people” (Israel) stricken for “my people” (He).  The term “He” must refer to the Messiah.

It is interesting to also note that the three main Hebrew words for sin are used in this famous chapter.  “Iniquity” (Hebrew = “Avone”) “transgression” (Hebrew – “Pesha”), and sin (Hebrew – “Het”, which means missing the mark’).  In each instance, this righteous servant takes our sins.  “He was pierced through (wounded) for our transgressions”.  (Verse 5).  “The Lord has caused the inequity of us all to fall upon Him”.  (Verse 6),  “He bore the sin on many” (Verse 12).  If we try to put the word “Israel” instead of the pronoun “He” and “Him” in each instance, we will see that it just doesn’t work.

Also notable is the fact that all ancient rabbinic authorities apply Isaiah 53 to Messiah.  You can see many of these comments in a booklet entitled “Challenge of the Ages” which is available at the AEBM office.

Psalm 22:1, 6-18 gives us a description of the Messiah’s death in our behalf.  I have heard of many secular and even atheistic Jewish people becoming believers after reading this prophecy.

Zechariah 12:9-10:  Here, Messiah’s first and second comings are alluded to in one verse.  (This passage is very valuable because it does just that!)  Verse 9 sets the time for verse 10, that is, when Jerusalem is surrounded by armies and God will “seek to destroy all the nations that come up against Jerusalem”.  This is a future day.  When this occurs then “they will look upon Me whom they have pierced.”

Finally,  Hosea 3:5  shows that Israel would remain many days without a ruler, then be restored in the last days.  (“David their King” in verse 5 refers to Messiah, the seed of David.)

In closing, let me share a few words about the current Jewish mentality, which can range anywhere from the practicing Orthodox Jewish person wearing his skull cap (yarmulke) to the person who says he is an atheist.   Do not be surprised if most Jewish people you talk with do not believe the Bible.  He or she has never been taught to consider it as the inspired Word of God.  In question are all Messianic passages from the Old Testament; we must always let them know that it is in THEIR Old Testament that we find these passages.  Most Jewish people do not know that Isaiah, Micah and Zechariah are in the Old Testament or even that they are Biblical books.  When asking a Jewish person to read an Old Testament prophecy, for instance Isaiah 53, I will emphasize three things in introducing it; this is from Isaiah in the Hebrew Old Testament scriptures written 750 B.C. Hence, they will know for sure that it is from their scriptures and certainly written before Jesus was born.  Our Old Testament differs from theirs only in that some of the prophets are in a little different order, a minor variation to be sure.  If you give them a tract and a book with the abbreviations for different books such as Isa. Or Jer. etc. make sure you explain what they stand for; I can assure you most would never have a clue.

It is essential that we show any Jewish person the fulfilled prophecy in Jesus the Messiah.  This of course is our goal, to show that Jesus is their Messiah and Savior.  He is the same Messiah that thousands of Jewish people embraced in the early church and through the last twenty centuries.  This goal is reached primarily through developing relationships. I have so many friends who have wonderful relationships with Jewish people but don’t have a clue how to go to the next step.   This two-part article hopefully offers a beginning, just a beginning, in taking these relationships further.   I can assure you that the most skeptical Jew has been won to the Savior through considering Jesus in Old Testament prophecy.  And I think it is so important to point out the impeccable life of Jesus and how he lived as convincing evidence for his being the Messiah and the Son of God.  We will find no other man who has lived a life comparable  to that of Jesus in recorded history.

Next month I will talk about the different Jewish translations, Jewish cults and Jewish sects.  Please feel free to call me anytime for more information and materials.

Jim Stretchberry has been the executive director of the American European Bethel Mission (AEBM) for the last 9 years.  Prior to his tenure with AEBM Jim served as a Pastor with Pastor Rickey Ryan at Calvary Chapel Santa Barbara.  Jim’s passion for the lost is evident in his commitment to missions for much of his Christian walk.  He regularly travels throughout Europe and the Middle East ministering both humanitarian aid and the glorious gospel of Christ.  His Jewish heritage has given him a passion to see his Jewish brothers come to recognize their long-awaited Messiah in Jesus of Nazareth. 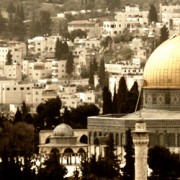