Blog - Latest News
You are here: Home1 / PASTOR, WHO HAVE YOU BEEN MEETING WITH! 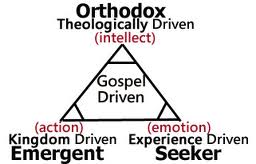 “Now John answered and said, ‘Master, we saw someone casting out demons in Your name, and we forbade him because he does not follow us.’  But Jesus said to him, ‘Do not forbid him, for he who is not against us is on our side.’”[1]

“Behold, how good and pleasant it is for brethren to dwell together in unity!”[2]

A hot topic in the body of Christ in North America these days is the issue of unity.  Simply, followers of Jesus are wondering about what kinds of churches and Christians they can affirm and hang out with.  Can a Calvary Chapel Christian hang out with a Reformed Christian?  Can a seeker sensitive church affirm a fundamentalist church?  Can a pastor who favors expository preaching go to lunch with the topic-driven preacher across town?  Can we develop meaningful relationships with anyone outside of our immediate denomination, movement, or dogmatic theological persuasion?  Let me share some things from a couple different meetings I’ve recently attended that have caused me to revisit the issue of unity in the body of Christ amongst pastors and congregations afresh.

A Tale of Two Meetings

Recently I’ve had the opportunity to gather at two different meetings with two different unity dynamics.  The first meeting was with four pastors including myself from different denominations, theological and educational backgrounds, and churches with different philosophies of ministry.  The second meeting was with most of the Calvary Chapel pastors of Northern Utah and their wives.

Meeting with the Calvary Chapel Camp

At the meeting with the Calvary Chapel pastors and wives there was lots of good fellowship, food, and encouragement.  It was a good chance to get to know each other better and pray for what God is doing, and just catch up.

The unity factor in this meeting was primarily founded on the Jesus of the Bible and the biblical gospel.  But there was more to our unity than Jesus and the simple gospel.  That particular group had what we could call wider doctrinal unity as well.  In addition to the essential doctrines of orthodox Christianity we shared similar perspectives on philosophy of ministry, theological issues like eschatology and soteriology, and the method of Bible teaching (expository preaching).

Having unity in Jesus and His gospel was definitely the most important thing to this group.  But it is true that we also had a special connection over secondary issues like those named above.  We agree on many things that a person doesn’t need to affirm to be considered a born-again Christian with a genuine relationship with Jesus.  I enjoy having wider doctrinal unity with friends.  It’s fun to talk about and appreciate our unique role in the body of Christ locally and globally.  So, enough about that; let’s move on to the next meeting.

Meeting with the Multi-perspectival Camp

My other meeting was with some pastors from a multi-perspectival frame of mind.  In this group, instead of having wider doctrinal and methodological unity, we had what you could simply call gospel unity.  This is because, beyond the biblical gospel, we have differing perspectives and practices on a number of things.

One of the pastors is definitely the guy with the coolest church in town.  They’ve got an awesome building, awesome music, inspiring messages, lots of art and technology, and all that good stuff.  They do really well reaching the un-churched and younger generations in the Salt Lake Valley.

One of the other pastors at this meeting is a seasoned man with lots of wisdom and experience.  He is from a Dutch Reformed background, and serves in our area as a sort of pastor of pastors helping planters and their families stay healthy and network together.

Another pastor in the group has been a prominent leader regionally in the Evangelical Free Church, and is now one of a number of teaching pastors at one of the largest churches in Northern Utah.  The church at which he serves gets much love and criticism in our area because on the one hand they seem to be reaching lots of people. But on the other hand they are seen by some as a kind of Walmart style church because they’ve successfully worked through a few church mergers which resulted in one multiple campus church which used to consist of at least four independent churches.  No matter what your opinion is about the philosophy of ministry of this church, the truth is that Jesus is using them to save many people in Northern Utah.  They are being used greatly by the Lord to reach Mormons and former Mormons in our area, and I praise God for that.

Lastly, there was me!  I am the lead pastor of a Calvary Chapel affiliated church called Refuge Church in Riverdale, UT.  If you were to come to our church you’d typically find loud music, one hour expository sermons, and an atmosphere of love.  As of the time of this writing we are planning our sixty-sixth baptism in the past fourteen months which is to take place on Christmas day because Jesus has been graciously saving and changing lots of people through a less than two-year-old church-plant.  Most of the people whom Jesus has saved at Refuge are burnt out on religion because of the influence of the predominant religious institution in our state.  They are normal people, with human problems, looking for a God of grace and transformation.

In all of the differences one might be able to deduce from the men represented in this meeting, it wasn’t our differences, but the things in which we had unity that impacted me most.

Confession time: In the past I have definitely spent much of my time beating up the body of Christ with which I don’t have wider doctrinal unity.  I’ve been one of those guys content to read only books by guys I have full or at least buzz topic agreement (certain bents on the finer points of soteriology, etc.).  I have been content to mainly hang out with Christians and churches I have almost total agreement with, while criticizing any church or pastor that seemed seeker sensitive, topical, emergent, and on and on and on.

Time for more confession: I had even had some of the thoughts and emotions described above toward some of the ministries represented by the pastors who were with me in the second meeting.  About five years ago, the Holy Spirit worked me over in regard to my sectarian mentality, and I’m thankful for that.  Sometimes that residue of sectarianism still creeps up and I have to kill it, and the pride that spawns it in my heart.  This meeting helped me do that again.

I saw a number of things in this meeting that both challenged and encouraged me which spurred me on to write this post:

1. These guys showed love for our brothers in Christ that I wasn’t sure I possessed.

The entire point of this meeting from the perspective of these men was to figure out how they could bless Utah church-planters.  They didn’t care if the guy was Baptist, Calvary Chapel, Reformed, Arminian, or what, as long as they stood for the biblical Jesus and the biblical gospel.  I saw in the eyes, and heard in the voices of these guys a love for other brothers that was born simply out of the reality of being brothers in Christ with them!  I honestly didn’t know if that kind of heart was beating in my chest with the same genuineness and grace I sensed in these men, and I prayed for it silently right in the meeting as the Holy Spirit was challenging me through what I was seeing.

2. These guys showed incredible love for me which I knew I didn’t deserve.

Additionally, I was humbled by the love these guys had for me.  As I sat and listened to these guys I couldn’t help but wonder how I had ended up at a meeting with men Jesus was using so much.  And yet, it didn’t matter to them that I was younger, different in some ways, or whatever.  They believed we could work together for the good of the kingdom beyond our wider doctrinal and methodological issues, and they were glad I was there.  They even wanted to hear my ideas!

3. These guys really are on the same mission to which Jesus has called me and the church I lead.

No matter what differences the men in this meeting have, we have the more important things in common.  We worship the same Jesus, preach the same gospel, and advance the same kingdom.  Those common bonds are greater than any differences we possess, even important differences.

4. These guys really do have the same enemy that I do.

This last point was perhaps most impacting for me in regard to unity.  As each man shared about spiritual warfare in their life, it occurred to me that we were not only unified in our Savior and mission, but in our enemy.  Each man had dealt with spiritual warfare in the form of demonic dreams, depression, and sickness.  We’d dealt with all the same kinds of satanic opposition to the work Jesus had called us to complete.  As we talked about the struggles and challenges of serving Jesus in a demonically oppressed place like Utah, it suddenly became even clearer that we are certainly not fighting for different teams at the end of the day.  We go about the fight differently.  We emphasize different weapons at times.  But when it comes down to it, we’re fighting for the same kingdom, and we’re fighting against the same enemy.

If you struggle with sectarianism, repent and be blessed.  Whoever isn’t against you is for you.  I’d encourage you to meditate on Luke 9:49-50 and see what the Holy Spirit has to say to you.  Let’s enjoy the wider doctrinal unity we have with other believers, churches, and pastors in our unique theological and methodological camps.  But let’s also enjoy simply having gospel unity with those outside our specific camps.  Find and pray with pastors and Christians of other backgrounds.  Develop relationships of encouragement with them.  The very witness of the gospel depends upon it.  Let me leave you with a prayer of Jesus He offered to the Father on behalf of all of His people, world-wide, of all generations:

“I do not pray for these alone, but also for those who will believe in Me through their word; that they may be one, as You, Father, are in Me, and I in You; that they also may be one in Us, that the world may believe that You sent Me.”[3]